The amendment that could save Brexit 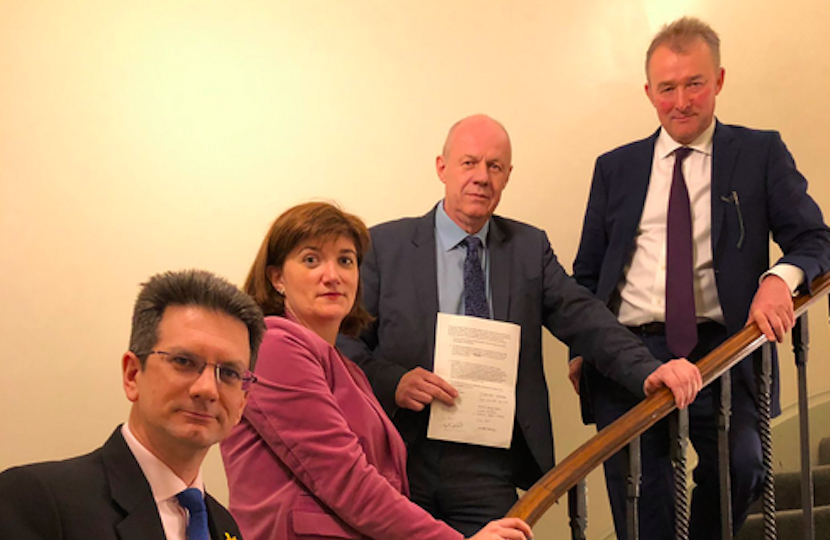 Damian is hoping to table an amendment today, it is supported by Iain Duncan-Smith, Nicky Morgan, Steve Baker, Jacob Rees-Mogg and other unlikely bedfellows! The article below was published today by Paul Goodman on conservativehome.com

An amendment has been tabled to today’s ambiguous No Deal motion.  It puts four main proposals.  First, that the Government publish its Day One Tariff Schedules for No Deal.  Second, that to allow businesses time to prepare for the operation of any tariffs, it seeks a brief Article 50 extension to May 22.  Third, that there should be a “set of mutual standstill agreements” between the UK and EU until December 2021, during which “the UK would pay an agreed sum equivalent to its net EU contributions and satisfy its other public international law obligations”.  Fourth, that the rights of EU citizens resident in the UK should be unilaterally guaranteed.  This is MalthouseTwo.

It offers something to almost everyone – in the Conservative Party, at least.  For harder Brexiteers, it offers No Deal as a last resort.  For softer ones, no “cliff-edge”.  For many of both, a generous move on EU citizens.   For all, a country that honours its obligations.

It is the product of the most creative current alliance in the Parliamentary Party.  It contains MPs who voted Remain, such as our columnist Nicky Morgan and Damian Green; others who voted Leave, such as Steve Baker, Iain Duncan Smith and Jacob Rees-Mogg.  Simon Hart (pictured), co-chair of the loyalist Brexit Delivery Group, is a signatory to the amendment.  So, significantly, is Nigel Dodds: that presumably squares the DUP.  At a time when Tories are losing their heads, this group are keeping theirs.

By voting for the amendment today, assuming the Speaker selects and calls it, Theresa May and her Ministers could back a plan without incurrring legitimate criticism for breaking manifesto commitments – of the kind that Graham Bradywas properly making yesterday evening.

Were the Government functioning properly, it would whip for this amendment.  But since the Prime Minister has bowed to blackmail from a cabal of Cabinet Remain-leaning fanatics – Amber Rudd, David Gauke, Greg Clark – by promising a free vote on the Government motion, it is hard to see how this could happen.  Still, Julian Smith will surely see the point of a move that can bring Conservatives together.  Readers will understand that we don’t exaggerate in writing that the amendment may be a last chance to do so.

So if it’s all so easy, I hear you ask, what’s the problem?  It is that the EU is publicly rejecting a managed No Deal – although, of course,it has announced plans for one already.  No Deal is by definition a grey area.  Malthouse Two seeks simply to make it greyer.

“We’re hoping that the EU sees sense,” one of the plan’s pushers told this site yesterday evening.  We understand why Malthouse Two is a very long shot indeed.  But the alternatives are deep winter: more resignations, leadership chaos, the likely defeat of May’s Deal third time round, Oliver Letwin taking control of the Commons, a possible election, a formal Tory split, and a Marxist Government which sees Venezuela as a role model.

It would be easy this morning to “accentuate the negative, eliminate the positive”.  We resist the temptation.  Amidst the darkness, there is a glimpse of light.